Posts like these.. drive me just slightly crazy these days. 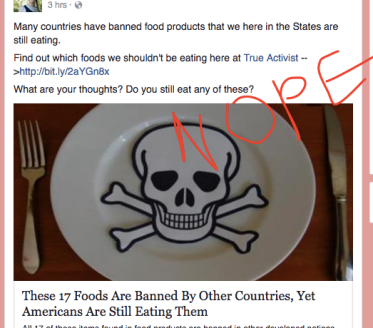 I don’t blame anyone for getting affected by them.. but let me tell you a little story about banning “bad” stuff by other more enlightened countries who are apparently less evil and profit-driven than US (insert eyeroll).

This summer I interviewed participants in Ukraine as part of my project on food and health perceptions. Several of my respondents happened to be lawyers.. One of the topics under discussion was GMOs (genetically modified organisms). The non-GMO stickers have been put on foods in the country since at least 2013

when I visited last. Anything from foods to chewing gum to water bottles boasted the round green NO GMO sticker. Most people I discussed it with actually acknowledged it was simple marketing and didn’t place much trust in the stickers anyway..

So when this July my interviewees mentioned that “well, you HAVE to have the non-GMO label in Ukraine”, I thought they meant that brands just needs to keep up with the competition in hopes of selling more of their product under the illusion of naturalness and purity (big deal for Ukrainians, who still live with the Chernobyl accident of 86, and still worry about environmental pollution in foods).

Well, No- i was told. Ukraine in fact passed an actual law somewhat recently forbidding the import, export, production, or sale of foods with any GMOs. So if you want to place a product on the shelves of Ukrainian stores, they simply have to be certified non-GMO.

Oh! OK… what about reality? In actuality, if you’re placing that product on Ukrainian shelves.. you just pay to get the label put on. Ta-da, it’s non-GMO!

It is all so political, that discussions of population health are mostly for decoration..

Posts like that mentioned above are designed to get you thinking with indignation “I can’t believe my country is so interested in profits!.. they sacrifice our health while other countries actually care about their people’s well being..”. But why do you think Ukraine banned GMOs? It’s to make $ off the new certification and labeling procedures, it’s to look cool in front of Europe (we really want to be accepted to EU, mkay), it’s to keep our image as a serious exporter of quality agricultural products (hey, Ukraine wants to stay the famous breadbasket of Europe! And demand for “clean” or eco agriculture is big. You can’t afford to lose your place in that market)…

It is all so political, that discussions of population health are mostly for decoration (not like absolutely nobody cares, but that’s not the main reason for any of these policies). And of course this is not just Ukraine- I’m just telling you a short specific story. Either way, poor regulatory practices in the country mean that anyone can buy that non-GMO label: nobody’s testing anything and nobody is checking compliance, guys.