Well, this short post will be off my usual topics.

My husband & I have just been (once again) discussing how villains in various forms of media are often shown enjoying classical music (my husband is an orchestral conductor, thus the topic) . We’re suspecting it has to do with trying to portray their higher intelligence. But why do we think super intelligent people are into “classical music”?

First of all, a bit of interesting information that particularly pleases the rock fan in me:  “more intelligent”* individuals prefer reflective and complex genres of music (classical, jazz, blues, and folk), but they also prefer “intensive and rebellious” music (alternative, rock, and heavy metal) (Rentfrow & Gosling, 2003). I will keep putting “intelligence” in brackets because measuring such a complicated construct.. well, i’ll keep taking it with a grain of salt.

I was in a mood to procrastinate on my own work, so i began looking up studies on music and intelligence. I quickly noticed this one- since I love evolutionary perspective on all the things, I was immediately biased to read further! 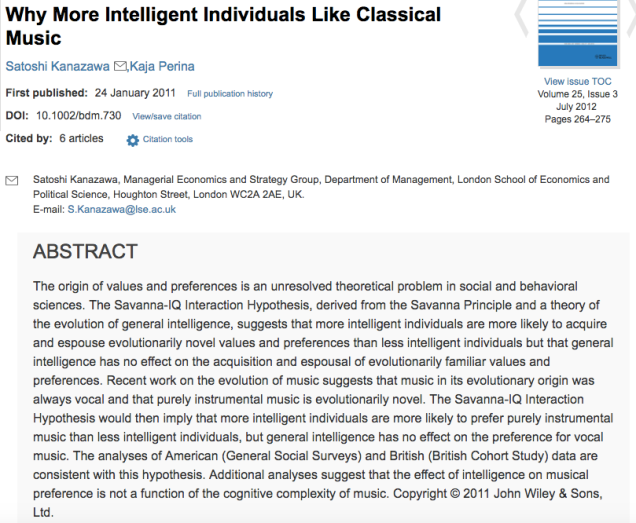 These guys propose an alternative hypothesis to the more intuitive suggestion that classical music is more complex thus highly intelligent people enjoy it more. This explanation is one I myself assumed- classical orchestral pieces are definitely more complex in their design than a modern 3-minute pop song containing up to 4 chords. In this study, Kanazawa & Perina apply the Savanna-IQ Interaction Hypothesis hypothesis (Kanazawa, 2010), which suggests that more intelligent individuals have less difficulty with evolutionarily novel stimuli- such as classical music.

…people of “higher intelligence” might find it easier to like classical music because such music is more evolutionarily novel, not because it is more complex

The Savanna-IQ interaction hypothesis is a logical union of two theories: 1) evolutionary psychology argues that human brains (like any other organ of any other species) are adapted to the conditions of the “ancestral environment”, not necessarily the current one. As a result, they might find it difficult to comprehend and deal with situations that did not exist in the past; and 2) evolutionary psychological theory of the evolution of general intelligence posits that “general intelligence may have evolved as a domain-specific adaptation to solve evolutionarily novel problems, for which there are no predesigned psychological adaptations”.

The authors test this theory in US and Britain. They measure music preference, intelligence*, and some control variables (e.g. social class and education). I was of course particularly interested in how “intelligence” is measured: this study used a verbal intelligence test that asks people to select a synonym for a word out of five candidates (verbal intelligence is highly correlated with general intelligence). As for music preference, respondents had to rate liking for different types of music, which researchers categorized as mostly vocal (15 genres) or mostly instrumental (3 genres) in the analysis. Their results in both cultural groups show that individuals who score higher on the “intelligence” test indeed are more likely to prefer :purely or largely instrumental music, while measured intelligence has no effect on preferring purely or largely vocal music. Social class and education also predict liking for instrumental music, but they do not confound the statistically significant effect of intelligence (they don’t explain it away).

This is interesting.. an immediate alternative view is that people want to “show off” their intelligence by publicly expressing a taste for instrumental music (like classical and jazz), but it’s still not clear why such genre of music came to be associated with higher intelligence in the first place. Perhaps the Savanna-IQ Interaction Hypothesis can explain why such an association developed and, once this association is popularly known, it’s easy to explain people’s motivation to cultivate this preference (to “signal” intelligence). Lastly, it’s important to clarify that this hypothesis does NOT propose that preferring evolutionarily novel values and preferences is MORE ADAPTIVE in the current environment- it doesn’t increase reproductive success in any way.

My “research” on an off-topic took me less than an hour. This is obviously not my area of expertise so if you have any comments- please feel free to share!