Since my research includes asking questions about why people think what they do about health, I spent a lot of time reading various discussion boards and comment sections on different health topics. In the last several days I’ve had such an overload of insane online discussions about vaccines, GMOs, and diets that I almost want to quit…

And yet the often entertaining arguments keep me coming back! The science folks vs. lay folks debates are also interesting since I am myself an ex anti-science alternative health believer who has now “switched sides” on many issues (or as I prefer/hope to think: turned much more moderate in my views based on understanding scientific evidence better).

Have you ever seen a conversation between a “concerned mom/dad who follow their gut” and a “science proponent with experience in the lab” discussing vaccinations? It is sad and funny as you see things like these:

– science person providing links to peer-reviewed literature (really just abstracts, folks can’t access the full text most of the time), questioning parent’s credentials, attempting to explain herd immunity, claiming they lack understanding of science and suggesting to take an into to epidemiology course, blaming them for increasing rates of preventable disease…and as last resorting to calling them stupid, biased, etc.

– concerned parent shares links to blogs and anti-vaccine websites, calls the science person’s degree “useless”, emphasizes their credentials as a parent who “just knows” and does their research (via blogs and specific sites), and very often attacks the science guy/girl as being paid by Monsanto or FDA, being dogmatic and inflexible as their degree was provided by corrupt institutions, being stupid, etc.

Nobody ever appears to switch sides, understand where the other person is coming from, or take their evidence seriously. The process of reading such conversations is often sadly hilarious yet less often informative. But most importantly it shows people’s biases.

What are these biases and why do they matter in these online wars!?

Have you ever seen someone accuse someone else of “cherry picking” evidence?

The term for that is biased assimilation: it is the tendency of people to selectively credit and dismiss information in a manner that confirms their prior beliefs. As a result, people of opposing predispositions become MORE divided as they react to balanced arguments (Lord et al., 1979).

This means that reading the same balanced (!) article can make the Anti-GMO parent more skeptical and afraid of GMOs and the pro-GMO researcher more confident that they are sufficiently safe.

We know that people’s evaluations of an argument’s strength depend heavily on how credible they find the source of the argument (Hovland & Weiss, 1951-1952). This credibility is comprised of knowledge, honesty, and impartiality. It is established that people impute these qualities to sources with whom they have an “in group” connection of some sort, while they deny them to “out group” sources. 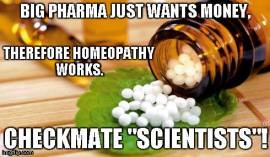 This means that the anti-GMO parent will “cite” postings by alternative health websites as evidence and science, while the pro-GMO researcher will either cite only peer-reviewed literature or websites that report on such literature. Because, honestly, the parent feels as far and excluded from the “snobby scientific community” as they possibly can. Those scientists might be all after money and have conflicts of interest, why cite them?

honestly, the parent feels as far and excluded from the “snobby scientific community” as they possibly can.

For the most part, people with graduate degrees related to science argue better: they provide references, they attempt to stick to the topic instead of resorting to ad hominem attacks (rejecting an argument based on some irrelevant characteristic of the author)… pretty much because graduate education trains one to do these things and stay as unbiased as possible. The pro-science folks online without advanced degrees and credentials do worse and make the rest look bad by attacking the “concerned moms and dads”, calling them stupid, crazy, uneducated, woo-believers, pseudoscience followers, etc.

The ad hominem attacks aside, why don’t the science folks make a difference in these conversations?

1) Without even trying to do so, they are intimidating.

They cite studies and use jargon that is often hard to understand for a lay person. It doesn’t mean the lay individual is stupid or crazy, it means they really aren’t equipped to understand the scientific terms,  methodologies, etc. An average person is unsurprisingly scientifically illiterate and folks in academia can forget that and, unfortunately, appear a bit arrogant.

Lastly, how is some concerned dad or mom going to look up a study you just shared? They can only access an abstract, not the whole text since they have to pay for it… and once again they are not equipped to read the methods and results sections (it took me several years to feel comfortable with scientific papers! And the stats can still be terribly challenging).

2) They do not take into account the worldview of the lay person.

Without a strong belief in science (partly due to not understanding the scientific process- e.g. that nothing can ever be “proven” in science), strong suspicion of the motives that industry has, and fear of the many risks that surround our modern living, the lay person looks for sources that mirror their values. This can explain why celebrities and individuals like the “Food Babe” are appealing- people see them as essentially “the same” as they are. Moms see Food Babe as another mom who cares about her kids and finds time to  research the “bad stuff” in foods that they don’t have time for. They see the Natural News website as a source that could not possibly be biased due to big bad industry influence. So when these people encounter a scientist that attacks the Food Babe’s claims, they are in awe. They are unable to comprehend how in the world someone could be against anything these sources are saying! It is hard to realize someone credible, non-corrupt, and intelligent totally disagrees with what you strongly believe should be correct.

Thus, without taking consideration of people’s world-views, values, and philosophies, it is very hard to make a difference with objective studies. Non-experts won’t know how to read them, they’re afraid to trust them, they’d rather go online to a blog that already confirms their values and beliefs and hear none of the opposing arguments. Like this… 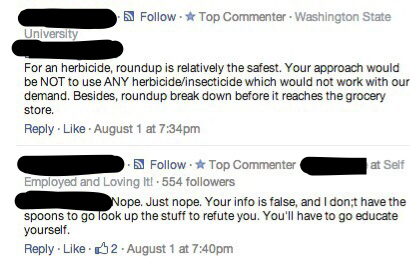 I feel like both sides could use some recommendations.

-Don’t be so dismissive of alternative theories and keep an open mind instead of dismissing something not backed up by peer-review (we know studies take time! good studies take lots of time! many research questions with nutrition are close to impossible to answer with enough precision). Skepticism should not only be applied to “pseudoscience” online but to the scientific community as well. At the end of the day, remember science is a belief system too.

-Taking into consideration people’s thinking is affected by biases and feelings is important when responding. Understanding why people over-exaggerate risks that researchers feel are way less problematic is necessary, instead of calling people stupid, crazy, and uneducated. Just… be nice 🙂

-Watch out and not fall into deep conspiracy theories that can wipe out all logic and common sense (e.g. thinking anyone disagrees online is most definitely paid by someone evil). Once you start distrusting companies with being transparent about their ingredients, you start suspecting the government, and so on- until you’re convinced your neighbor is an alien (check out InfoWars and CoastToCoastAM.. i’m not making this up). Healthy level of skepticism is necessary, but the entire FDA organization is not out there to murder you. I know a couple of people working for the FDA that try to ensure the food supply in the US is safe, they have a lot of work to do.. they’re not perfect but no organization is. It does not mean there aren’t rogue people in all sorts of agencies- but there are plenty of others who try to monitor and illuminate that.

-Try to be more open-minded. Not alternative sites (that also sell organic and superfood products) but to credible pro-science websites. This can help avoid becoming alarmist and trust anything a “good” person  might say online (e.g. food babe; no credentials, no ideas what “research” means, one-sided arguments, cherry-picking scientific papers, selling products with the same ingredients she condemns, and making money off you). Do not assume that if someone’s views fit your own, they are automatically well-meaning. And vice versa: if someone’s views challenge yours, do not jump to conclusions about their poor character and ulterior motives. Lastly,  be nice 🙂

One thought on “Online Health Wars: Science vs. Public”