Association (AAA) meeting has ended! This is my 3rd year attending and it is still as crazy, overwhelming, and fun at the first time. 🙂

The 2015 meeting was in Denver, CO (gorgeous gorgeous city! My first time there) and I wanted to write down a couple of impressions and things learned from this year’s event.

SO, first of all- what I presented on.. This September I began collecting my dissertation data. I also got accepted for a poster session for the Anthropology Society for Food & Nutrition at the AAA, thus I knew I’d better have an interesting poster ready by mid November. :S

It was rushed & stressful (when is it not?), I had to put together the poster & print it from Finland (I was traveling constantly before the AAAs!) but it got done.

My poster showed some preliminary results of how people (from mostly urban southwestern US) talk about healthy eating. I mostly focused on results from the pile sorting interview (presenting visual “maps” of how the 42 cars people sorted can be represented in 2 dimensions when averaged over 30 participants). I also talked about the several distinct “theories” of healthy eating that emerged from the interviews (using Q sort agreement rankings). I got good feedback and some very crucial suggestions for further work! 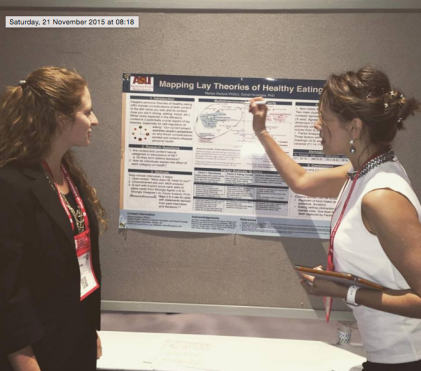 Of course, I also attended a bunch of amazing talks! Some of my favorites are summarized here:

There were a LOT more talks I found fascinating, but it is too overwhelming to mention them all 🙂 #AAA2015

One thought on “5000 anthropologists walk into a bar..”